Despite all the advancements in modern ophthalmology, disease can affect vision, resulting in blindness. Worldwide, there are 200 000 people who have retinitis pigmentosa, 2 million with age-related macular degeneration (AMD) and 6 million have other forms of sight loss.

Since the 1990s, epiretinal implants have been developed to electronically stimulate the retinas of blind people, restoring a certain amount of visual function in patients who have sight loss, therefore helping to improve their independence and quality of life. The common factor between these systems is that they comprise of a multi-electrode matrix, forming the core of the stimulator, which is placed as close as possible to the retina. This matrix emits electrical impulses that stimulate the remaining live nerve cells, which are present on the retina.

Of the epiretinal implants available, some use a camera and calculate the sequences of the stimulation impulses in an external video processor.

This is the case for the system developed by EPIRET, who is proposing a telemetric retinal implant, fully implanted in the eye.This device includes 25 electrodes mounted on a flexible polyamide film, and connected via an intraocular cable to an impulse generator and to a receiving module integrated into an intraocular lens, on the edge of which a take-up spool is mounted.

This is also the case for the Argus II system, developed by SecondSight (www.secondsight.com), and which incorporates a retinal prosthesis and an external device (glasses, a camera, a video processing unit and a cable). The retinal prosthesis is surgically implanted inside and around the eye. The prosthesis includes an aerial, an electronics module and an electrode array. A tiny video camera is fitted to the patient’s glasses. The images captured by the camera are sent to a small computer (the video processing unit), worn by the patient. The processed images are then sent to the glasses via a cable, then sent wirelessly to an aerial contained in the retinal implant. 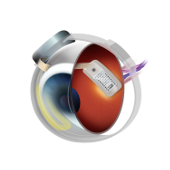 Figure 1. Implanted inside and around the eye, the retinal prosthesis includes an aerial, an electronics module and an electrode array.

The signals are then sent to an electronics module, housed in the retinal implant, which are then converted into tiny electronic impulses on the electrodes. The impulses emitted stimulate the cells in the retina, which in turn, transmit the visual information to the optic nerve (using the normal process used to perceive images), thus creating the perception of illuminated shapes in the brain.

Figure 2. The external equipment includes glasses, a camera, a video processing unit (VPU) and a cable.

Patients therefore receive the sensation of light via the eye, with the image being transferred to the brain. They learn to interpret these visual shapes, thus regaining a certain level of visual function: perception of shapes, movements, objects and large letters.

Results have generally been observed from the first few days post surgery: patients are capable of visualizing a square light on a black screen. After several weeks of exercises, patients can, for example, follow a white line on the ground. After several months, they can differentiate between letters and detect people’s outlines.

Currently, nearly 260 patients around the world are fitted with an Argus II device, due to collaborations between large ophthalmological surgery centers. In France, the device is available at three centers of excellence, validated for implantation into patients with retinitis pigmentosa: the Quinze-Vingts National Ophthalmological Hospital Center in Paris, the Reference Center for Rare Genetic Ophthalmological Diseases in Strasbourg and the ophthalmological department at Bordeaux University Hospital. Beyond France and the United States, the Argus II is also available at approved centers in Canada, Germany, Austria, Italy, The Netherlands, Saudi Arabia, Spain, Switzerland, Turkey, the United Kingdom, Taiwan, Russia and South Korea.

Researchers and engineers are currently working on improving the retinal prosthesis system, and expanding the number of diseases that could benefit, for example, in the treatment of patients with a less advanced stage of retinitis pigmentosa. Notably, the study has shown that the more residual vision the patients have, the less their retina is disorganized, and the more consistent the benefits provided by this technology are.

Another study is investigating the benefits of retinal stimulation in patients with age-related macular degeneration (AMD). This study is of particular interest: on the one hand, due to the fact that there are lots of patients with this condition (twenty times more than those with retinitis pigmentosa), and on the other, because these patients have some residual peripheral vision (and in this situation, integration has been observed between the peripheral vision and the central vision produced by the retinal implant).

Furthermore, a clinical trial is about to start with an even more revolutionary system, which will directly activate the visual cortex (therefore, on the surface of the brain). The objective: to create vision directly within the visual centers of the brain. The hope is that this system will be able to help people with conditions other than those treated with the current retinal implants (diseases that affect the eye, the optic nerve or the visual pathways, following a trauma for example).

Furthermore, through the software (so, without the risk of a surgical procedure), studies are working towards increasing the number of pixels created in patients, to improve the clarity and detail of the vision, and thus create a more natural visual experience.