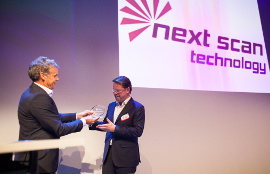 EPIC president presents the EPIC Phoenix Award 2017 to Lars Penning and Ronny De Loor. The award was presented on 6 April during the EPIC’s annual general meeting in Eindhoven, The Netherlands.

“Myself and Ronny De Loor are really proud to receive this EPIC Phoenix award. For us, it is an honour and recognition to be elected by such a remarkable group of European entrepreneurs in photonics. From the very beginning, we believed in the opportunity to address an uncharted area in laser material processing. Since timing determines the necessity of an enabling technology, we are encouraged and convinced that we grow with our partner SCANLAB addressing the markets of the future and make further contribution to the EPIC community.” said Lars Penning, CEO and Co-Founder of Next Scan Technology, after being presented with the prestigious award.

“The EPIC Phoenix award symbolizes the innovative entrepreneurship, that eventually leads to success stories of innovative European Photonics Companies” says Benno Oderkerk, CEO of Avantes in The Netherlands, and president of the board of directors of EPIC.