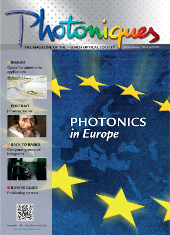 A few years ago, while I was a PhD student and a young EOS member, I happened to receive, once a year, the so-called international issue of the German magazine Photonik. It gave me the feeling to be a part of a European project in photonics, with a very special, I would say original and enthusiastic, spirit. For some reason, this recurrent (and much welcome) gift has been stopped − and this has left me orphaned. It has quickly appeared to me, and to the board of the EOS as well, that we had to act towards a renewal of this European action.

Now, why 21 shades of Photonics? Because we are 21 nations gathered in the bosom of the European Optical Society, within near horizons. Think about it: if you take a compass and draw a circle to see what lies within a three-hour flight from Brussels, you will come across all actors of the EOS. These near horizons are galvanizing, and they can help building a common spirit.

This special issue of the French magazine Photoniques is intended to work towards that ambitious yet realistic goal: to resume the thread of history with a European issue of a national journal on photonics, and also to help building a common spirit. Please accept it as a gift from a close friend.