The path length of light in opaque media

The path length of light in opaque media 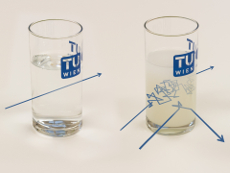 A seemingly paradoxical prediction in physics has now been confirmed in an experiment: no matter whether an object is opaque or transparent, the average length of the light’s paths through the object is always the same.

What happens when light passes through a glass of milk? It enters the liquid, is scattered unpredictably at countless tiny particles and exits the glass again. This effect makes milk appear white. The specific paths that the incident light beam takes depend, however, on the opacity of the liquid: a transparent substance will allow the light to travel through on a straight line, in a turbid substance the light will be scattered numerous times, travelling on more complicated zig-zag trajectories. But astonishingly, the average total distance covered by the light inside the substance is always the same.

Professor Stefan Rotter and his team (TU Wien, Austria) predicted this counter-intuitive result together with French colleagues three years ago − the French teams involve Romolo Savo, Ulysse Najar, Sylvain Gigan at the Laboratoire-Kastler-Brossel (experiment) and Romain Pierrat, Rémi Carminati at the Institut Langevin (theory). The theoretical calculations have already been published three years ago in a joint publication by Stefan Rotter's team and his colleagues from Paris. Now the same research groups managed to verify the remarkable result in an experiment. Test tubes were filled with water, which was then obfuscated with nanoparticles. As more nanoparticles are added, the light is scattered more strongly and the liquid appears more turbid.

“When light is sent through the liquid, the way it is scattered changes continuously, because the nanoparticles keep moving in the liquid”, says Stefan Rotter. “This leads to a characteristic sparkling effect on the tubes' outer surface. When this effect is measured and analysed carefully, it can be used to deduce the pathlength of the light wave inside the liquid.” And indeed: irrespective of the number of nanoparticles, no matter whether the light was sent through an almost perfectly transparent sample or a milk-like liquid, the average path length of light was observed to be always the same.

This result helps to understand the propagation of waves in disordered media. There are many possible applications for this: “It is a universal law, which in principle holds for any kind of wave”, says Stefan Rotter. “The same rules that apply to light in an opaque liquid also hold for sound waves, scattered at tiny objects in air or even gravity waves, travelling through a galaxy. The basic physics is always the same.”

Figure. Light on its way through a liquid: In case of a transparent liquid (left) light paths are straight lines. In case the liquid is made opaque through nanoparticles (right) light paths get more complicated through scattering. Some of the paths become longer, others shorter - on average though the length of light paths is the same as in the transparent case. (Copyright: TU Wien)